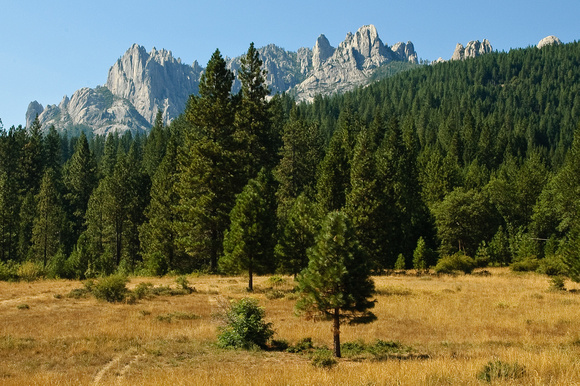 Castle Crags is a dramatic and well-known feature in Northern California. Although the mountains of Northern California consist largely of rocks of volcanic and sedimentary origin, granite bodies (plutons) intruded many parts of the area during the Jurassic period. Heavy glaciation at this location during the Pleistocene eroded much of the softer surrounding rock leaving the towering crags and spires exposed, from which the Castle Crags pluton derives its name. Exfoliation of huge, convex slabs of granite yielded rounded forms such as the prominent Castle Dome feature of Castle Crags.
Elevations range from 2000 feet along the Sacramento River near the base of the crags to over 6500 feet at the summit of the tallest crag.
©2008 YL
Powered by ZENFOLIO User Agreement
Cancel
Continue