Manning Park, one of our family favourite destinations:

Established in 1941 the park was named in memory of E. C. Manning, Chief Forester of British Columbia from 1936 - 1941. Mr. Manning was killed in an airplane accident in 1941. During his time as Chief Forester he was very instrumental in developing the idea of setting land aside for future generations to enjoy.
The terrain in the park varies from wet coastal rain forests, to jagged snow-capped peaks, alpine meadows filled with wildflowers, to a chain of small lakes, and broad river beds along the valley floors. A network of trails criss-crosses the park. The park is best known for its magnificent midsummer displays of subalpine flowers, but there are other flora such as at Rhododendron Flats, near the park's western entrance, which has a substantial colony of pinkish-red rhododendrons, a protected indigenous species that blooms in early to mid-June. Some of the less common species the park aims to protect are the Mountain Beaver, Wolverine and the Cascade Golden-Mantled Ground Squirrel. (From Wikipedia)

Назад на главную страницу / Back to the start page 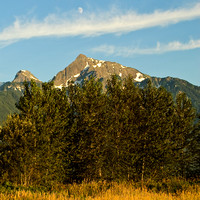